Not An Inch Left To Ink…Why So Addicted To Tattoos? 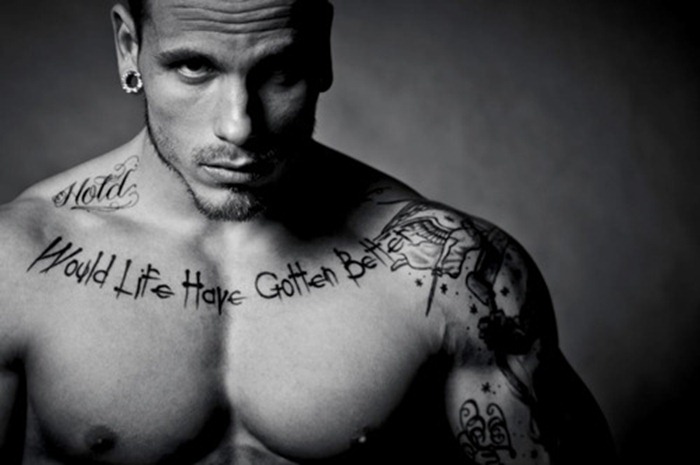 I am sure, all of you, once in your life time, might have come across some men who are inked from head to toe. And the fact is that as many as 14% of Americans are into getting tattoos. For some, tattoo is a personal expression that defines them but some get really addicted to the extent of having tattoos all over them. A few opine that a drive to acquire tattoo is not an addiction, they call it ‘passion’. There are many psychological and physiological factors that lead to tattoo addiction.

Attention
Most of the tattoo advocates do not accept it, but in some cases, they agree that for some, it maybe a cry for attention. For these ‘some people’, it becomes a reason to start an interaction with a stranger, to get socially accepted and make their presence felt in the crowd. It is believed that those who crave for attention – positive or negative can become addicted to tattoos, only for attention.

A sense of belonging
People believe that covering their bodies with ink can give them a sense of belonging and to belong to any particular group, you need to have a tattoo. It is common in prisons, biker groups or gangs. This makes them feel powerful and strong, moreover, they feel that they are not alone. To prove their loyalty towards any particular group, they get ready to ink their whole body at once, and this can lead to potential tattoo addiction.

Rebel
Certain tattooing rituals symbolize rites of passage or the inclusion, other tattoos represent an attempt to do the opposite. Several symbols are particularly representative of rebel such as pirate and confederate flags. The location or just the presence of a tattoo exemplifies rebellious attitude, regardless of the image depicted in the tattoo. Activists for many causes often appear so utterly dedicated to a cause that their single-mindedness resembles obsession or addiction. These defying attempts possibly can reach a level of addiction.

Pain
The pain of being tattooed might also be the intoxicating element that draws an individual time and time again. Self mutilation and self injury has become a form of addiction and people in order to practice a sense of control over their pains, often get addicted to pain they feel while getting a tattoo. The pain they cause to themselves during the process of tattooing, somehow work as a therapy for relieving emotional or mental stress. They find solace through the pain of the tattoo needle and as a result get addicted to tattoos.

Spirituality
Those who are true believers, often try to show their spiritual connection by inking tattoos. Tattoos are as old as any religion. In modern age, people try to express the art of devotion through imprinting religious icons. Some find their way towards spirituality through the art of tattoo, the art of body modification for them is related to the prayer. They may find themselves compelled in an almost addictive manner to return to their path to spiritual fulfillment.

There could be numerous other reasons for tattoo addiction, but some major reasons of concern have been discussed here. I hope all of you are not turning towards any addiction that ends up making you a tattoo addict.